I took on this restoration of a small Yorkshire barn in order to hone my skills and improve my portfolio (in readiness to apply to the Prince’s Foundation Building Craft Apprenticeship programme). I approached the Bolton Abbey Estate regarding voluntary work and they came back with a proposal to restore the Old Hatchery.

The Fish House or Old Hatchery, was used as a hatchery for fish eggs which would be used for game fishing on the estate. It had been run down for many years its small size made it useless for farming. The estate were keen not to let it fall into further disrepair, and agreed that they would pay for the materials for new windows, timber gutters, cast iron fall pipes, a new door liner, gate and roof spars. I was to provide the labour.

The windows were made from Sapele timber. The louvres are housed in a separate cartridge. This allowed me to fit the windows then install the louvres. It also meant that if the louvres became fast over time, they could be removed and eased. The windows were finished with an aluminium primer then weather seal paint.

I also re-roofed the building and installed timber gutters and cast iron fall pipes. The fish house is now used as a hunting bothy for the local shooting syndicate.

Shortly after carrying out this Yorkshire barn restoration I was accepted onto the apprenticeship programme, where I had the opportunity to hone my skills on a slightly different project – the Bird Hide. 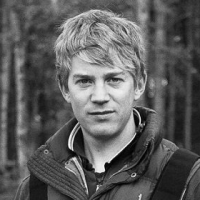 Why I Love Traditional Timber Framing

On Placement at Buntingsdale Hall